The latest countries to register the benefits of tourism related development, are Zimbabwe and Laos, nations that top the world tourism growth in the last years.

President Robert Gabriel Mugabe of Zimbabwe is expressing his gratitude for WORLD BEST TOURIST DESTINATION status for his country.

Zimbabwe tourism has registered an outstanding change of fortune after being selected WORLD BEST TOURIST DESTINATION IN 2014 by the world tourism institution-European Council on Tourism and Trade.

We have registered an increase in annual earnings to $1,5 billion after an improvement in international sentiment, said. Zimbabwe Tourism Authority, chief executive Karikoga Kaseke.

This is coming from tourism bringing only $827 million to the state revenues which is almost an 80% increase in tourism related revenues.

Visitors are flocking to Victoria Falls in record numbers, after the visit of European Council on Tourism and Trade President and his retinue and this is a sure sign that Zimbabwe tourism is turning a corner, an industry leader says.

Latest figures reveal hotel occupancy rates at Victoria Falls are hitting an all time high, sitting at 77.6 per cent last month, compared to 62.6 per cent during August last year.

Ross Kennedy said the boom in tourists had impacted across all sectors, from 2 star to 5 star accommodation, and big hotels to exclusive boutique properties.

Most performance benchmarks, including revenue earned and visitor numbers, had been smashed during the month of August.

Bookings for 2014 and 2015 were very healthy and the number of different countries where visitors are coming from is steadily growing, further enhancing demand and reputation, he said.

The data showed most visitors to the Victoria Falls Safari Lodge were from the United States, followed by Australia, the United Kingdom and Zimbabwe. “It all adds up to a bright picture ahead,” Mr Kennedy said.

“In comparison to current world tourism trends, these statistics are simply staggering, and a powerful reminder of the positive impact that a strong tourism industry can have on an economy.” 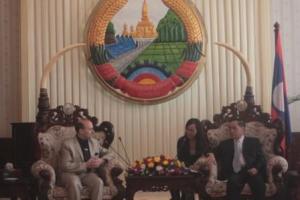 After being elected WORLD BEST TOURIST DESTINATION FOR 2013 and Favorite Cultural Destination in 2013 Laos has become a beacon of tourism in the Indochina region.

Already 40 hotels, including five international chains, are scheduled to open in Laos over the next five years as the country becomes a more popular tourist destination.

Three global brands – Mercure, Ibis and Best Western – have already opened their doors in Vientiane, and one regional brand has entered the World Heritage Site of Luang Prabang to cash in the World Best Tourist Destination status of the country.

Furthermore, 25-30 three- and four-star hotels are set to open in the capital, with some in other tourist cities.

The government aims for 3.9 million tourists this year. The number of arrivals should reach 10 million within five years but we need another success in WORLD BEST TOURIST DESTINATION to consolidate our status.

The number of American and European tourists has significantly increased in recent years.

Currently, seven foreign airlines, including Thai Airways International, AirAsia and Bangkok Airways, and two local carriers are operating in and out Laos. Some of these airlines run charter flights during high season.

Two years ago, the European Council on Tourism and Trade named Laos the “World’s Best Tourist Destination for 2013”, which put the country on the global tourism map especially for its rich history, culture, traditions and natural beauty.