Africa is on the rise is a well-known trope but the rapid climbing on the top of world tourist destinations is a reality powered by booming economies, improving security, better air connectivity and of course incredible natural and historical potential.

A new memento of this unstoppable march toward high-end tourism status was the decision of global tourism institution – EUROPEAN COUNCIL ON TOURISM AND TRADE to recognize President of Djibouti as a global leader in tourism development.

President of Djibouti Ismail Omar Guelleh has been named member of European Tourism Academy in recognition of his visionary leadership.

As it is the academic tradition, The Letter destined for World Leaders of Tourism and Development will be presented to H.E. President Ismail Guelleh on the opening day of World Capital of Culture and Tourism festivity by European Council on Tourism and Trade President-Professor Dr. Anton Caragea.

The European Tourism Academy encompass world leaders who proven themselves as creators of outstanding initiatives related to world development, tourism growth, tourism diplomatic initiatives and in fostering sustainable tourism and developing programs that give back to local and global communities.

More can be observed here:

LETTER FOR WORLD LEADERS OF TOURISM AND DEVELOPMENT

PRIME MINISTER OF ETHIOPIA RECEIVES THE LETTER FOR WORLD LEADERS

According to the international media, President Ismail Omar Guelleh is being honored for “his developmental policies which lifted Djibouti out of poverty and raised it according to World Bank on no.5 on the top of world fastest growing economies in 2018.

World Bank has placed Djibouti on no.5 on world level on the rate of economic growth.

President Ismail Omar Guelleh is to be commended for a visionary leadership that enacted on national level policies of reconciliation and inter-community dialogue, encouraged sustainable tourism, wildlife conservation, and economic development attracting major hotel investment, resulting in the remarkable turnaround that has led to Djibouti’s rise as one of the leading growing tourism destinations in Africa today (European Council on Tourism and Trade).” 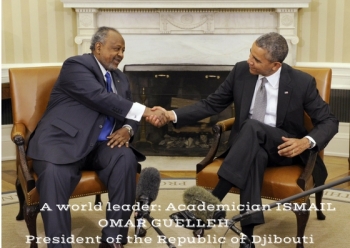 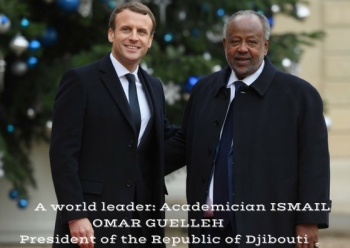 The Press Dossier of an intensive diplomatic activity of a world leader: Academician Ismail Omar Guelleh President of the Republic of Djibouti.

Among other recent recipients of the Letter destined for World Leaders of Tourism and Development and academician title, an eminent place is held by H. E. Prime Minister of Kingdom of Cambodia Hun Sen who enacted policies that made Cambodia to be the first country in tourism development in 2016 and 2017 at world level.

Academician Mircea Constantinescu, European Tourism Academy Director declared “Growth in this industry has proven to be a driver of shared prosperity because H.E. President Ismail Omar Guelleh has ensured that Djibouti-ans benefit directly.

This is one of the reasons that we salute in him a world leader and a development example.”

We recommend you to see: