WORLD TOURISM DAY 2018 celebration was decided to be held universally on September 27 2018 and the official theme will be TOURISM: PROTECTING CULTURE AND HERITAGE!

Another decision was to continue until 2030 the world level program of GLOBAL AMBASSADORS FOR TOURISM AND SUSTAINABLE DEVELOPMENT GOALS.

These where the executive decisions taken by European Council on Tourism and Trade leadership on the Word Tourism Day celebrations.

Celebrated worldwide since 1980, World Tourism Day at European Council on Tourism and Trade is commemorated usually at the end of September each year and hosted in the capital of the country crowned as WORLD BEST TOURIST DESTINATION OF THE YEAR.

The official ceremonies for WORLD TOURISM DAY have taken place in the presence of President Professor Dr. Anton Caragea and having in observance members of European Council on Tourism (ECTT) and Trade, European Tourism Academy, diplomatic corps accredited to ECTT and members of PARLIAMENTARY ASSEMBLY FOR UNITED NATIONS SUSTAINABLE DEVELOPMENT GOALS (SDG).

In the opening ceremonies for the World Tourism Day Professor Dr. Anton Caragea has made the long-awaited announcement: The Ambassadors for Tourism and Sustainable Development Goals programme will continue in the next year.

ECTT President Professor Dr. Anton Caragea signs the decree to continue to the Ambassadors for Tourism and Sustainable Development Goals programme onto the next period.

As a result of the demands coming from leaders, statesman`s and peerless world personalities involved in the carving of new development strategies and in implementing United Nations Sustainable Development Agenda we have taken the decision to further implement the program and to entrust the European Council on Tourism and Trade and PARLIAMENTARY ASSEMBLY FOR UNITED NATIONS SUSTAINABLE DEVELOPMENT GOALS SDG to continue the implementation of the program in the years to come. 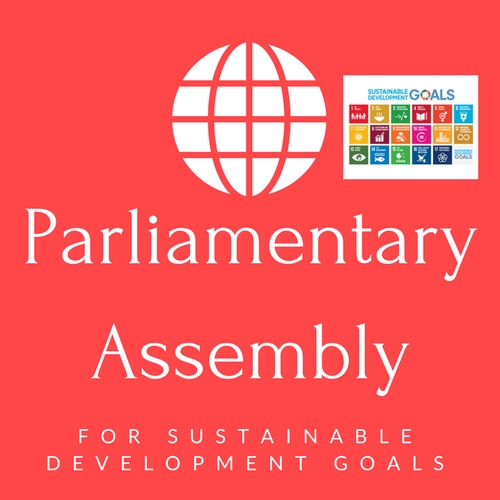 The new logo of a Parliamentary Assembly for Sustainable Development Goals.

On the same occasion Professor Dr. Anton Caragea announced the good news that: the international Campaign for the implementation of 2030 Agenda of United Nations, known worldwide as SUSTAINABLE DEVELOPMENT GOALS AGENDA, in the work of parliaments across the world has reached a first milestone, only after a year of existence, with the support of 262 parliamentarians from 22 national parliaments.

Now with this threshold passed, the Parliamentary Assembly for SDG`s, is now endorsed across party lines, ideologies and national agenda`s by more than 262 current members of parliament from over 22 countries.

The role of Parliamentary Assembly for SDG`s is “to ensure international cooperation, secure the acceptance and to enhance the legitimacy of the United Nations SUSTAINABLE DEVELOPMENT GOALS AGENDA and strengthen the elected representatives ( parliamentarians) capacity to act and to be more effectively and directly included into the activities of implementing and financing the programs related to SUSTAINABLE DEVELOPMENT GOALS AGENDA.”

“This is an important milestone,” remarked Professor Dr. Anton Caragea, the Parliamentary Assembly for SDG`s Executive President and campaign’s coordinator.

“The support of a UN Parliamentary Assembly for SDG`s by such a broad group of parliamentarians from all the world’s regions shows once again that it is high time for the SUSTAINABLE DEVELOPMENT GOALS AGENDA to be recognized as paramount for world development,” he concluded.

“If it comes to democratizing the SUSTAINABLE DEVELOPMENT GOALS AGENDA and to insure global cooperation, than the Parliamentary Assembly for SDG`s is the venue for a technical and democratic debate, said Professor Dr. Anton Caragea.

“The SUSTAINABLE DEVELOPMENT GOALS AGENDA would benefit from involving elected representatives in its deliberations. After all, in many cases it’s them who are needed to help implement UN policy at the national level, especially if it comes to the Agenda 2030,” said Mr. Catalin Nechifor from Parliamentary Assembly for SDG`s .

On this momentous occasion the new logo of the Parliamentary Assembly for SDG`s was unveiled by Professor Dr. Anton Caragea, the Executive President.

European Council on Tourism and Trade and European Tourism Academy had created and pioneered the PARLIAMENTARY ASSEMBLY FOR SUSTAINABLE DEVELOPMENT GOALS SDG`s uniting world parliaments in the efforts to implement in their work and legislation measures dedicated to bring to life SDG in every nation.

European Tourism Academy is the only world academy that is offering SDG based courses and curriculum based on role of culture and development in carving a new and better future for as all.

More information’s about the Parliamentarian Assembly for Implementation of Sustainable Development Goals can be read out on UN-SDG site here: