2017 WORLD TOURISM AWARDS LINE UP CANDIDATURES FROM 60 COUNTRIES, CITIES AND REGIONS IN THE FIRST DAY

The 2017 World Tourism Awards are designed to reward those succeeding within one of the world’s most relevant and important world industries.

World Tourism Institution ECTT awards will seek to showcase the best of the best from nations, cities and regions world wide capable of providing a unique, culture based and perfect experience away from home from the travelers of the world.

From 2 January 2017, the world tourism institution of European Council on Tourism and Trade, had started to officially register the countries and cities candidatures for WORLD BEST TOURIST DESTINATION for countries and WORLD CAPITAL OF CULTURE AND TOURISM for cities desirous to become international hubs for tourism.

The ECTT Awards for tourism and cultural achievements are the annual celebration that awards the best in tourism industry crowning, since 2006, the countries and nations excellence and investment in the tourism sector, putting under the world limelight the exceptional leadership and nation prowess, in the framework of WORLD CAPITAL OF CULTURE AND TOURISM and WORLD BEST TOURIST DESTINATION AWARD, and the category of FAVORITE CULTURAL DESTINATION and marking out outstanding cultural and investment tourism projects.

The ceremony started with the unveiling of the logo for WORLD BEST TOURIST DESTINATION AWARD IN 2017.

Starting their creation from 2006, the European Council on Tourism and Trade (ECTT) Awards have recognised nations and people’s strides for their innovative and determined tourism initiatives.

The contribution of the nations and leaders receiving world tourism and travel prizes is in line with ECTT guidelines for World Capital of Culture and Tourism and World Best Tourist Destination Award.

On the same occasion, the unveiling of the logo for WORLD CAPITAL OF CULTURE AND TOURISM IN 2017 had taken place.

For the tenth consecutive time, the ECTT-European Council on Tourism and Trade Awards will recognize the tourism potentials of the most attractive tourist and cultural destinations.

President Dr. Anton Caragea and European Council on Tourism and Trade President Office staff had given the starting signal for what is internationally known as Nobel`s or Oscar`s of tourism: the WORLD BEST TOURIST DESTINATION and WORLD CAPITAL OF CULTURE AND TOURISM competitions.

This event has taken place on January 2, 2016 and has marked the opening of the international contests for WORLD BEST TOURISM DESTINATION AWARD and WORLD CAPITAL OF CULTURE AND TOURISM for 2017.

Held under the patronage of the European Council on Tourism and Trade, the World Best Tourist Destination – Tourism Festival is an element of novelty in the world cultural space, consisting in a series of projects meant to promote the cultural diversity of the countries that outlined candidatures to World Best Tourist Destination, under the “Open Your Culture to The World” slogan.

Arab Embassies are highlighting the Coffee, Tea and Sweets as national treasures and arguments for World Best Tourism Destination designation.

The inauguration ceremony, started with the message of the European Council on Tourism and Trade President, who highlighted the potential of the world culture, and the contribution of such public and cultural diplomacy initiatives to the dialogue between cultures, between generations, between the diplomatic community and civil society.

Food Festival for 2017 Tourism “Oscar`s” presented national dishes from 56 countries candidates for World Tourism Awards and succeeded to capture the imaginations of the world public.

The celebration continued with a presentation of national dishes and culinary traditions and hospitality and folk costumes, presenting the participants with a unique opportunity to taste and enjoy the world food as part of tourism development of today.

Many ambassadors present on the venue to uphold their countries candidature`s emphasize the importance of food as a bridge toward friendship and understanding.

There is only a culture of understanding and friendship around food, stated President Anton Caragea opening the food section of WORLD TOURISM AWARDS.

Asian food: from China to Vietnam and India on display for European Council on Tourism and Trade festivities.

World Best Tourism Destination -Tourism Festival will continue until 5 January 2017, having a diverse agenda and over 50 embassies, cultural institutes and international organizations as participants, representing 5 continent`s.

This year, different countries and cities interested in tourism development will participate in the World Tourism Awards.

The candidates will be chosen in an annual ceremony and world tourism event, in which world tourism institutions jurors, made of experts and national tourism leaders, from all over the world, will vote the best travel destinations.

These awards highlight the excellence in major and international tourism categories for countries and cities and are a consolidated brand which celebrates its eleven anniversary this year.

The winners acquire instant international prestige and recognition and nation country banding and are becoming an example for the world, supporting and advocating nation branding and positioning into the world community. 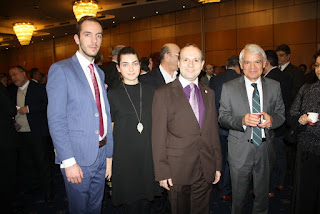