On 10th July 2015, in an official ceremony, Academician Mircea Constantinescu-Director of European Tourism Academy, had presented H.E. Prime Minister of Ethiopia-Mr. Hailemariam Desalegn with the insignia of honor and the certificate of honorary member of the academy.

In recognition of his contribution to the development of Ethiopian tourism, we are proud to hand over The Medal Of Honor to his Excellency Hailemariam, Prime Minister of the Federal Democratic Republic of Ethiopia and to recognize him as the newest academician member of the European Tourism Academy. this is the way in which Academician Mircea Constantinescu announced the acceptance of the newest meber of European Academy. 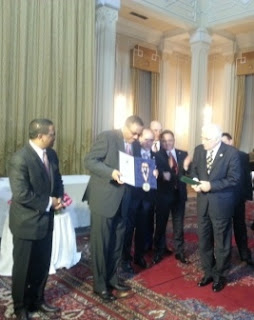 H.E. Prime Minister of Ethiopia-Mr. Hailemariam Desalegn presented with the insignia of honor and the certificate of honorary member of the academy.

The decision was taken on 25 June 2015 by the Academic Board of European Council on Tourism and Trade and announced in an official letter as a result of: Government of Ethiopia recognizing the importance of tourism as a key facilitator for the country development and international promotion, creating exemplary structures like Tourism Transformation Council, investing in infrastructure and capacity building, creating a special team under Your Excellency leadership for destination promotion and management and protecting the cultural, natural and historical patrimony of the country.

The full text of the admission in an academic institution is called laudation (from latin word-presentation) and we have the pleasure of presenting you with the text of laudation by Academician Mircea Constantinescu for H.E. Hailemariam Desalegn-Prime Minister of F.D.R of Ethiopia.

We are here to award to H.E. Hailemariam Desalegn, Prime Minister of the Federal Democratic Republic of Ethiopia the title of Honorary Member of European Tourism Academy.

Analyzing the curriculum vitae along with the activity of the Prime Minister Hailemariam we discover a complex person, a man of many talents, entirely dedicated to the development of his country, to the well being of the people of Ethiopia, dedicated to building a favorable image of Ethiopia in the midst of the international community.

His bachelor's degree in civil engineering, from Addis Ababa University, was fundamental for building a solid scientific education, giving him access to a high level knowledge and expertise.

The master degree, with Tampere University of Technology in Finland, gave him an European and international perspective upon the transfer of knowledge, expertise and technology.

Upon his return to Ethiopia, he served in different academic and administrative  capacities, including the dean of the Water Technology Institute, for 13 years.

But for him it was not enough. He wanted more…He wanted to acquire knowledge of scientific management of the country, of its human resources and natural resources as well.

And he acquired all this, earning a MA in Organizational Leadership in California, from the best…

We will not analyze here the political activity of H.E., but taking actively part in the political life of his country, it gave him the opportunity to work with people of Ethiopia, to be in the middle of Ethiopia’s people, to efficiently communicate, and being able to implement at the high level management of the country activities, reflecting the reality of Ethiopia and the wishes of Ethiopian people.

His activity as Minister of Foreign Affairs was indeed a success. As a diplomat he presented to the world the image of a peaceful country, of many resources and beauties, with people that praise hospitality, open in a friendly manner to the international community.

There is no wonder that with all these credentials His Execellency was able to excellently perform as Prime Minister, running an activity at the top level, for the benefit of Ethiopia and Ethiopian people.

In the country’s general framework, tourism is a complex activity, and His Execellency understood that tourism is not only for tourists to enjoy the natural beauties and the cultural heritage of Ethiopia. Tourism is for also the people of Ethiopia, is for the development of the local communities, so that everyone will be able to enjoy all that a beautiful and resourceful country may offer.

As a final remark, His Execellency is working for many years at the highest level of the African Union, was able to have a general overview, as well as a personal contribution, to the most important African institution, bringing together people and countries, managing the trend for ever growing development and international recognition of the African continent.

In recognition of his contribution to the development of Ethiopian tourism, we are proud to hand over The Medal Of Honor to his Excellency Hailemariam, Prime Minister of the Federal Democratic Republic of Ethiopia and to recognize him as the newest academician member of the European Tourism Academy.