WORLD BEST TOURIST DESTINATION AWARD had become a center of international tourism recognition in the last span of time.

After obtaining the highest world tourism accolade in 2012, the nation island of Trinidad and Tobago becomes the only Caribbean nation that registered tourism increase in the region.

In 2013 People Democratic Republic of Laos registered a plus of over 1,5 million tourists in the first year and a 7% increase in GDP, due to mounting tourism revenues and Zimbabwe: the 2014 winner rose from zero to hero, in tourism statistics after snatching the world best tourism destination designation.

This string of tourism success stories made 29 countries to start registering their candidatures for WORLD BEST TOURIST DESTINATION AWARD in 2015 more early than ever.

Already countries from Central and South America had put forward their touristic potential with a mind blowing extravaganza at Intercontinental Hotel in Bucharest where eight Latin American and Caribbean countries outlined their touristic, artistic and cultural potential for European Council on Tourism and Trade election committee.

ECTT President Anton Caragea highly praised their demonstration as a perfect display of Latin American cultural and touristic prowess that will be seriously regarded by the prize committee.

Middle Eastern countries have outlined also their fantastic touristic and cultural potential with: Turkey, Egypt, Palestine and Jordan in the vanguard of outlining their powerful cultural asset and explaining their security measures put in place to make tourism feel safe and secure and enjoy a well deserve vacation on sandy beaches of Sharm El Sheik or Alexandria of Egypt, discovering ancient cities of Petra and Jerash in Jordan or the Cappadocia coast in Turkey. 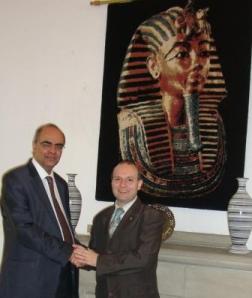 The Central Asian countries tourism potential is expecting to be discovered by the Kazakhstan candidature that is bringing the potential of Caspian Sea, the beauty of Astana-the XXI century capital of the country and the impressive historical legacy of Turkestan-candidate city to WORLD CAPITAL OF CULTURE AND TOURISM IN 2015.

Kingodm of Jordan has high hopes in being elected as World Best Tourism Destination in 2015.

In total an initial number of 29 country early bird registered their candidatures, appreciated Mrs. Teodora Nicolae-press officer ECTT and we are expecting that by the end of January 2015, when we will close the registration process we will have even more candidatures.

In total 14 cities and region`s from across the globe, aspire for the world famous designation.

Professor Dr. Anton Caragea had stated that: the evaluation process is already started and it is an ongoing research and decision activity.

We will have also countries that will be approach by us, to take part in the selection process, in order to obtain a balanced geographical distribution of the winners of WORLD BEST TOURIST DESTINATION and we will consider as always where we can have the biggest impact in promoting a new destination like in Trinidad, in promoting rural and social tourism, like in Lao PDR or rebranding a country and reasserting it in the world tourism field like in Zimbabwe case.

We hope that we will have the same global impact and weight in promoting new emerging destination`s and in asserting cultural tourism role and importance. Culture and social benefits of tourism are encapsulated in our attention, concluded President Dr. Anton Caragea his evaluation of 2015 candidatures for WORLD BEST TOURIST DESTINATION and WORLD CAPITAL OF CULTURE AND TOURISM.

Let`s wish good luck to all the contenders!