The Government of LAO PDR and ECTT delegation at the handover ceremony for WORLD BEST TOURIST DESTINATION AWARD FOR 2013.

The delegation had also the outstanding task of presenting to the people and Government of Lao PDR the highest honor in tourism: the WORLD BEST TOURIST DESTINATION AWARD FOR 2013.

The visit has being encompassed in the rapid developing bilateral relation between Europe and Laos, in a rapid evolving dialogue and a reciprocated desire to establish an extensive and consolidate partnership, Laos being presently the main partner of our European Council on Tourism and Trade in the South-East Asia area.

In the framework of H.E. President Dr. Anton Caragea visit an inclusive discussion was held with H.E. Thongsing Thammavong -Prime Minister of Lao. 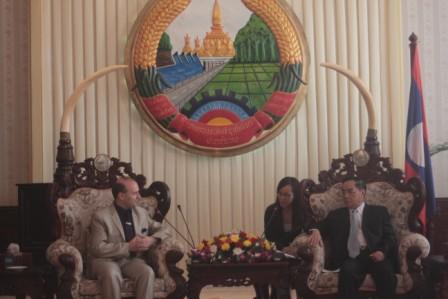 Tabled at the meeting where the extension of bilateral exchanges in areas such as economy, tourism, culture and political dialogue.

H.E. Thongsing Thammavong -Prime Minister of Lao has outlined for European delegation an extensive presentation of the Laos economic situation as a country in full and ample development, with a rate of annual economic growth of 4 to 7%, and an expansion rate of incoming tourists of more than 20% annually and being counted amongst economic tigers of the area.

Also the Prime Minister had expressed the sincere appreciation of the Government and People of Laos for the instrumental role played by Professor dr. Anton Caragea in promoting Laos image in the world and in bestowing the WORLD BEST TOURISM DESTINATION title for Lao.

On his turn, professor dr. Anton Caragea had emphasized the strong points of Lao: political stability, impressive economic development and the clear express desire to extend the bilateral relation.

Tabled at the meetings where issued such as the establishment of a Council for Business and cooperation, Bilateral Chamber of Commerce, Honorary Consulates and other structures destined to enhance the economic , cultural and political partnership.

H.E. Dr. Bosengkham Vongdara, Minister of Culture, Tourism and Information expressed his appreciation for the Professor dr. Anton Caragea support for Laos in championing at European level with considerable influence and energy the country as a WORLD BEST TOURIST DESTINATION.

During the discussion with Dr. Bosengkham Vongdara , professor dr.Anton Caragea had presented the arguments for Lao PDR being considered as a world power in culture and tourism , noting that in XXI century that values of a nation is encompassing the cultural and historical patrimony and in this regard Lao PDR is an outstanding country.

At the end of the meeting, professor dr. Mircea Constantinescu, Director of European Tourism Academy had bestow the title and insignia and certificate of European academician to H.E. Dr. Bosengkham Vongdara, Minister of Culture, Tourism and Information for his unremitting efforts in promoting tourism as a tool for peace and development. 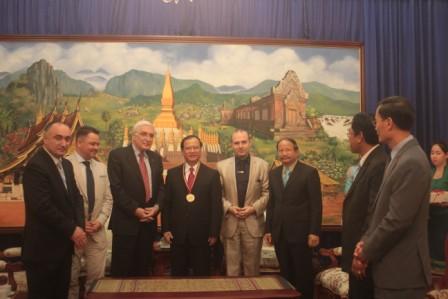 Also a special program was carved off for professor dr. Anton Caragea as WORLD AMBASSADOR OF NATURAL PROTECTED AREAS to visit special natural; monuments situated along the banks of Mekong river.

On 9 May 2013 in an impressive ceremony full of pomp and paraphernalia the WORLD BEST TOURIST DESTINATION AWARD FOR 2013 was bestow to the people and Government of LAOS.

The ceremony reuniting leaders of Government of Lao PDR, diplomats, academicians, business community, cultural and media representatives had included the presentation of the AWARD FOR WORLD BEST TOURIST DESTINATION IN 2013, the presentation of the main landmark beauties and scenic spots for tourism in Lao an emotional charged speech of H.E. Dr. Bosengkham Vongdara, Minister of Culture, Tourism and Information and concluding a large area of fashion presentation, music and dance spectacle that impress favorable the numerous assistance.

By the outstanding organizing the WORLD BEST TOURIST DESTINATION CEREMONY in Vientiane, the Government of Lao PDR had proved his extraordinary capacity to host international events and to organize high resounding world meeting.

The successful and felicitous visit of European Council on Tourism and Trade delegation , the high level and inclusive dialogue with the relevant authorities of Lao PDR, the reciprocated vision of rapid evolving relations, the clearly marked economic, touristic and cultural opportunities are all testament`s of the desire to further extend the dialogue.